Women and girls account for nearly 51% of the U.S. population, yet many chroniclers have only recently taken on the challenge of making sure women receive full and fair representation in the stories of American and world history.

From the National Women’s History Museum:

The Education Task Force of the Sonoma County (California) Commission on the Status of Women planned and executed a “Women’s History Week” celebration in 1978. The organizers selected the week of March 8 to correspond with International Women’s Day. The movement spread across the country as other communities initiated their own Women’s History Week celebrations the following year.

UMass Global applauds the women who make daily contributions to the university’s ongoing success by serving as members of our faculty and staff. We are also grateful to the many women who have chosen our university. During the 2020-21 data year, more than two-thirds of the students receiving a degree from this university identified as female. 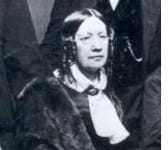 Catherine Beecher, educator and writer: “A member of a prominent activist and religious family, Catharine Esther Beecher was a nineteenth century teacher and writer who promoted equal access to education for women and advocated for their roles as teachers and mothers. Embracing traits associated with femininity such as nurturance, Beecher argued that women were uniquely suited to the moral and intellectual development of children, either as mothers or as educators.” Photo credit: National Endowment of the Humanities. 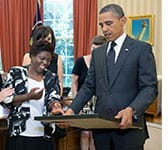 Lois Curtis: artist and co-plaintiff in a major Supreme Court case: “Lois Curtis was one of the plaintiffs in the landmark Supreme Court case Olmstead v. L.C. (1999) that established the right of individuals with disabilities to live in the least restrictive settings possible. Diagnosed with cognitive disabilities and schizophrenia, Curtis is no longer confined to an institution – she now lives in the community and works as a visual artist and public speaker.” Photo credit: Official White House Photo by Pete Souza, Public domain, via Wikimedia Commons.

r doubted her research on mRNA would work, even if most people around her dismissed it. Karikó’s research and perseverance proved that mRNA vaccines were possible and paved the way for the Moderna and Pfizer-BioNTech vaccines to end the Covid-19 Pandemic. Photo credit: Szegedi Tudományegyetem, CC BY-SA 4.0, via Wikimedia Commons. 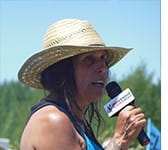 Winona LaDuke, activist: “Winona LaDuke, a Native American activist, economist, and author, has devoted her life to advocating for Indigenous control of their homelands, natural resources, and cultural practices. She combines economic and environmental approaches in her efforts to create a thriving and sustainable community for her own White Earth reservation and Indigenous populations across the country.” Photo credit: Frypie CC BY-SA 4.0, via Wikimedia Commons. 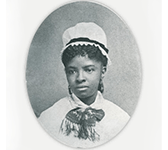 Joyce Parrish O'Neal, social worker and voting rights activist: “On March 7, 1965, Joyce Parrish O’Neal stood on the steps of her church, the Brown Chapel African Methodist Episcopal (AME) Church, and watched the violence unfolding along the Edmund Pettus Bridge in Selma, Alabama. While O’Neal was not on the bridge that day, she had participated in many marches supporting African Americans’ right to vote during the Civil Rights Movement.” 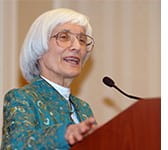 Bernice Sandler, educator and activist: “Known as the ‘Godmother of Title IX,’ Bernice Sandler fought for women’s rights in education. After being denied equal access to teaching jobs at her university, Sandler took matters into her own hands. In addition to starting a social revolution for women’s rights, she became the first woman ever appointed to a Congressional committee to work specifically on women’s issues.” Photo credit: Governor Press Office (Photographs, Electronic) Maryland State Archives.

Muriel Siebert, financier: “Muriel ‘Mickie’ Siebert was a fearless Wall Street broker that was known as The First Woman of Finance. She was also the first woman to become a member of the New York Stock Exchange, and the first woman to become the superintendent of banking for New York State. Although she did not have a college degree, Siebert successfully became one of Wall Street’s most popular names.” 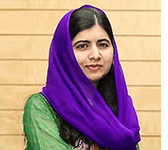 Malala Yousafzai, Nobel Peace Prize laureate: “At age eleven, Malala Yousafzai was already advocating for the rights of women and girls. As an outspoken proponent for girls’ right to education, Yousafzai was often in danger because of her beliefs. However, even after being shot by the Taliban, she continued her activism and founded the Malala Fund with her father. By age seventeen, Yousafzai became the youngest person to receive the Nobel Peace Prize for her work.” Photo credit: 内閣官房内閣広報室, CC BY 4.0 via Wikimedia Commons.