Brandman University recognized as 'most innovative' by U.S. News and World Report

The following content first appeared on the news page while UMass Global operated under its former name of Brandman University.

Brandman University ranks sixth among the Most Innovative Schools in the western region of the United States. The ranking is part of U.S. News and World Reports annual Best Colleges rankings. 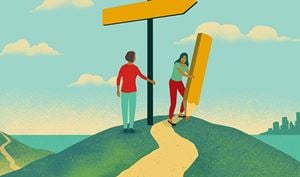 Recent innovations include Brandman MyPath ™, a flexible and affordable alternative for adults seeking to use their real-world experience in business or IT to advance their educations.

The Most Innovative Schools ranking is part of a peer assessment survey in which college presidents, provosts and admissions deans are asked to nominate up to 15 colleges or universities that are making the most innovative improvements in curriculum, faculty, students, campus life, technology or facilities.

According to U.S. News, the ranking “enables top college officials to pick schools that the public should be watching because of the cutting-edge changes the colleges are making on their campuses.”
Schools had to receive at least seven or more nominations to be listed with the highest ranked school receiving the most nominations.

“Brandman’s mission is to provide students with a dynamic education based on excellence and flexibility. Our goal has always been to provide continuous renewal and innovation,” said Chancellor Gary Brahm.

In addition to convenient class times and exceptional student services, Brandman can boast that 82 percent of its students graduate, more than most universities of its kind. It also has a lower than average default rate, meaning most students can repay their loans on time, and a high referral rate. See more: Proven Results

Previous awards for innovation include those from the National Association of College and University Business Officers (NACUBO) Innovation Award Program. In 2017, the custom-designed Student Accounts Receivable performance metric and collection system earned the university its second NACUBO award in two years. In 2016, the university’s integrated business functions for Brandman MyPath ™ won the same award.

The American Council on Education (ACE) also recognized Brandman in 2017 with its Institutional Transformation award for institutions with student populations of 5,001 or more. The award was created to acknowledge institutions for responding to higher education challenges in innovative and creative ways and achieving dramatic changes in a relatively brief period.

The university is consistently recognized in the Best Online Programs rankings, which are announced by U.S. News in January. The September U.S. News rankings focus on universities and colleges designed for students attending immediately after high school rather than on adults.